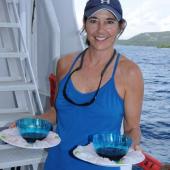 In deep waters off the coast of Curacao in the southern Caribbean, Smithsonian marine biologist Carole Baldwin leads the Deep Reef Observation Project (DROP). This is a Smithsonian effort to explore life on poorly studied tropical deep reefs and monitor changes in these ecosystems over time.

Carole is a well-respected authority on marine biology, especially tropical-marine fishes. Her face will be familiar to any of you who have seen the Smithsonian 3-D IMAX film, Galapagos, for which she was a scientific advisor and on-air talent. She grew up in coastal South Carolina and studied at James Madison University, the College of Charleston and the College of William and Mary.

She has published over 70 scientific articles, and her work includes the discovery of dozens of new fish species from Belize, Curacao, Tobago, Saba Bank, Australia, Cook Islands, El Salvador and Galápagos. In 2003 Carole was inducted into the Women Divers Hall of Fame, in 2006 she received the Ronald E. Carrier Distinguished Alumni Achievement Award from James Madison University, and in 2014 she was inducted as an alumni member into the James Madison University chapter of Phi Beta Kappa. She is currently in the Director’s Circle of the National Aquarium, a member of the Board of Governors of the American Society of Ichthyologists and Herpetologists, a Council Member for the Biological Society of Washington, and a sectional editor for the scientific journal Zookeys.

The Deep Reef Observation Project (DROP) is a Smithsonian effort to explore life on poorly studied tropical deep reefs and monitor changes in these ecosystems over time.